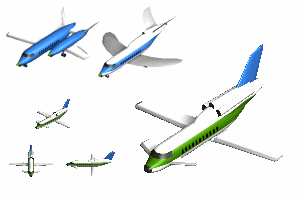 The Coronet is a futuristic aircraft using some sort of ducted fan engine; it's small and relatively slow, and is intended as an upgrade to turboprop aircraft such as the deHavilland Dash 8 and ATR-72.

I've redesigned the model for this aircraft several times. The original version was based on asymmetric Scaled Composites designs, but did not look good at TTD scale. The second version had silly-looking curved wings and tail.