From PikkaWiki
Jump to: navigation, search
The Boeing 727 is a jet aircraft in av8. 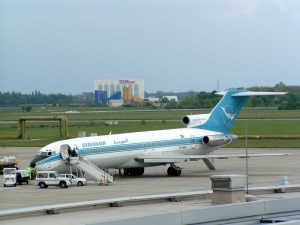 The Boeing 727 is a medium-sized airliner, and the second most sold airliner of all time, after the Boeing 737. It is faster than its little brother, but with three tail-mounted engines more expensive to run and maintain.

The 727 has its own inbuilt "airstair" under the tail, allowing it to operate from unimproved airfields. A special device was fitted to all 727s in the 1970s which holds the airstair closed during flight, so people can't jump out!